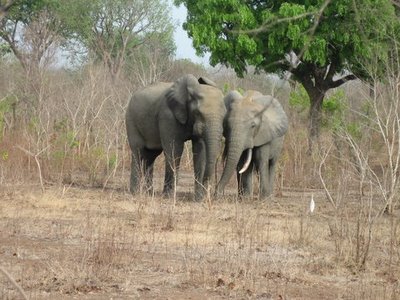 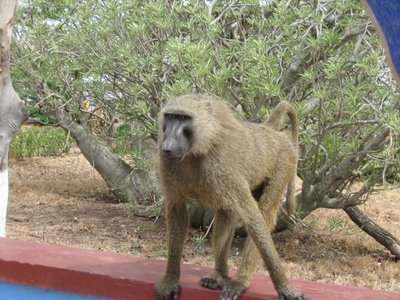 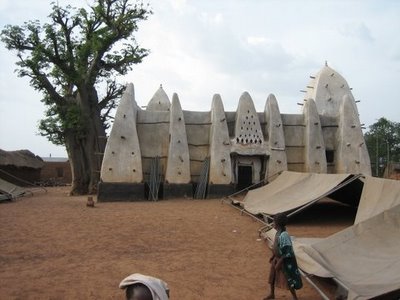 It was a drama of elephants, baboon fights, waterfalls and near death experiences. If you want to know more read on - if you require something slightly less surreal I do believe Lost has started again on C4.

It should have been 14 days of hedonistic fun but our tour consisted of outrageously early starts (we're talking around 3.30/4am here!) and the most uncomfortable, long, dangerous bus rides ever.
We left Kumasi for Tamale (that's in the Northern region -check a map!) It was a seven hour bus ride but luckily we'd splashed out and left the battered tro-tro's behind in exchange for a relatively luxurious bus, which played very bad Nigerian films all the way.
Watching the landscape change from lush greenery to flat dry lands was very interesting. The abundant church buildings were replaced with mosques as we entered the Islamic north (basically the missionaries couldn't be bothered to go that far.) Houses were merely round clay huts with thatched roofs - making the cement brick and tin roof houses of the south seem like relative luxury.

TAMALE
Ironically, considering it's Ghana's third largest city, there's not much to do in Tamale except get ripped off by the helpful guides - one 15 year old showed us round, gave us advice, then hit on us for money for school books - we found out later that he'd quit school last year because fleecing tourists for money was much more profitable. I don't feel too bad because as I handed over the money (only a few pounds) I gave him the full force lecture on how he shouldn't waste his life and even if he was tricking us. I informed him he wasn't going to be a cute school boy for too many more years...

Fresh from our seven hour trip we got up at 3.30 to head to bus station for our next bus. It was quite interesting to walk through the streets while it was still dark, stepping over the sleeping bodies and seeing people preparing for their day.
At the bus station there was a disorganised scrum for tickets. We got numbers 60-65. Considering there were only 48 seats on the dilapidated bus, this was going to be interesting. And it was. Firstly they filled the seats - 2 on each side of the aisle. Then they put down a flip down seat and rammed 2 onto that seat. Moving/breathing was impossible. I decided I was going to get DVT but then after reading in the guide book that we were about to go on some of the worst roads in Ghana, I settled on straight death.
After lots of loud complaining from the Ghanaians that they had packed us on like animals, we set off. After 30 minutes of tarmac road we hit the rough stuff. Red, bumpy roads that almost threw us off our seats (if we hadn't been wedged in so tightly) as it hurtled along.
Three hours and a taxi drive later we arrived at our destination: Mole National Park.

MOLE/LARABANGA
Although, in the middle of nowhere, this place is a dream.
On getting there (alive) Matt and I decided to celebrate by getting the most expensive room in the place which overlooked the watering hole where elephants came to drink and bathe.
It was worth every penny as baboons and warthogs wandered past our balcony to a backdrop of gorgeous forest and elephants spraying themselves with water and mud.
Also, the swimming pool just metres away added to the luxury of it all.
We went on a walking safari where we stood just metres away from the elephants - they're even bigger than you expect them to be. There were antelopes galloping around and bird and butterflies of all descriptions. We even saw some antelope bones that had been ravaged by a lion but unfortunately/fortunately there was no sign of it.
But the baboons proved to be a bigger problem.

LUCIE Vs BABOON
Relaxing by the pool, Charlotte ordered some toast but then disappeared the room. The toast sat on the table untouched but was soon sniffed out by a huge and hungry baboon.
He galloped over on all fours. I promptly legged it to a safe distance but Lucie stood her ground and tried to shoo him away with a pair of trousers. He backed down for a moment but then stared at her with his beady eyes and unmoving, mask-like face. She hesitated, so he took the chance, grabbed the toast and ran. It was very scary as they are so strong and, well, hairy really.
One tried to get in our room later that day - it actually opened the doors. Matt very bravely hid inside the room while we all cowered behind Lucie - now known as Dave Baboon for her ability to fight the hairy apes.

BIKES BUT NO BRAKES
We hired some bikes to cycle to Larabanga - a local village which is home to one of the oldest mosques in sub-saharan Africa. Although, that was exciting in itself, the most exciting thing for me was finding out exactly what was wrong with everyone's bikes. Matt had no brakes - yup - he fell off but only once. My bike had dodgy steering - it was kind of like those BMX's they stunt up at seasides so when you turn the handlebars right the wheel moves left. But we made it. The mosque itself is pretty amazing - legend has it that a holy man threw a sword and it landed on the site of the mosque. When they started digging they discovered the foundations were already there - Hmmmm.

ON THE ROAD
Up and on a bus by 4am - we got back to Tamale at 8am and decided to push on to the Volta region. It was a 14 hour trip so we needed to break it at Bimbilla - a small village en route.
We sat on the Bimbilla bus and waited for it to fill up. And waited. And waited. Two hours passed, then three, then four. It was nearly five hours of waiting when we finally moved. By which point we'd gone through the various stages of madness, seen a woman get run over - I could see the tyre of the bus that was on her leg as she screamed in pain - it was horrible.
It's amazing how much happens around you when you are sat in one place for hours. We got talking to a man on our bus - whose dad only happened to be the Chief of Bimbilla - the village where we were headed. Fantastic! His name was Jacob and he was very funny. Eventually, our bus set off. We bounced and rattled along terrible rocky, untarmaced roads, just grateful to be moving after hours of stasis.
And then...the bloody bus broke down in the middle of nowhere.

We piled off, covered in our usual armour of red dust and sat despondently at the road side while the driver and his mate tinkered under the rust bucket that was our bus. Somehow, they managed to get it going again. We arrived at our destination around 7pm - making a neat 15 hours since we'd left that morning.

BIMBILLA
It is a great little village - everyone was very friendly, just shouting hello and not asking us for money, which does make quite a nice change. It helped that Jacob came to show us around - escorted by the Chief's son is always the best way to see a place. We also went to the palace (a small collection of clay huts - although they did have a horse!) to see the Chief - Jacob's dad. He was very interesting - he'd been a mechanical engineer before being made chief 4 years earlier.

WATERFALLS AND MOUNTAINS
The next day we arrived in Ho Hoe - a mountainous village surrounded by lush green forest in the Volta region.
Wasting no time, we went for a hike to the waterfalls, it was only an hour walk through some quite nice forest. It was beautiful and we went for a swim
in the plunge pool and watched the bats flying at the side of the mountain.
There was the option of climbing to the higher falls but frankly, why risk your life when most water looks the same?
However, I did decide to tackle the country's highest mountain - at 885 metres it's probably a hill - but the highest I've ever been is to the top of Primrose Hill, North London to celeb spot...

Hill or not - it was bloody hard work. We had to stop a few times to rest and often were scrambling up on all fours. But it was worth it - the view from the top was amazing.
The trek down was slightly harder work - my lack of balance soon became apparent as every few minutes I would slip and slide a short way, while a stream of expletives came out of my mouth. One of us - not me I assure you - had to have a 'toilet emergency' up the mountain! That's got to be one of the most inventive places to go to the loo!

KOKROBITE BEACH
To recover from our hectic schedule we spent the last two days on the beach in a hedonistic hippy paradise owned by a British woman.
It was lovely and we met lots of fellow white people. One American girl had even gone to UEA and knew my friend - small world and all that!
I even met a Jewish Canadian, although after a few drinks I started to talk at him in that 'I'm the most interesting person ever' way that you do when you're drunk. After about an hour he excused himself to the bathroom and then never returned, leaving me sitting there like a muppet waiting for my friends to return. Nice to know I still have the ability to talk a guy into bed - kind of!

There wasn't much else to do at the beach except drink fresh banana daquiris, get massages, eat lovely fresh fish from the sea and sunbathe. All very relaxing you would think. But no - enter Lucie...

THE LUCIE DRAMA
Caroline and I were lying on the beach sunbathing when a Ghanaian man jumped over us and started stripping off his clothes. Immediately this caught my attention, along with lots of people standing on the beach and pointing out to sea. We jumped up and immediately my innate journalistic abilities kicked in.
'Something's going on,' I informed Caroline.
Then Charlotte, our fellow volunteer, ran up.
'I can't see Lucie,' she said.
All of a sudden it stopped being interesting and started to be pretty scary. We desperately began scanning the sea in the place we had last seen Lucie - who, although proud of her individual style of doggy paddle, is not the strongest swimmer.
There was no sign of her.
Then all of a sudden we saw her head bobbing above the water far out to sea. About 10 Ghanaians were swimming over to her.
All we could do was stand on the beach, saying 'no, no, no' over and over again.
Thankfully, the tide pulled her back in to shore and she was able to stand up.
After what can only have been a few minutes, she was back on the shore and was fine. She said she realised she was in a bit of trouble but was focussing more on keeping her head above water rather than panicking. She was more embarrassed about all the fuss that had been caused.
The sea is so strong that one minute you're standing up near the beach, the next it's pulled you out so far you can't stand up.

After that scary moment I decided I'd skip sea swimming for the rest of the weekend and take my chances at the bar.

Hi i am going to Ghana in July with my church check out my blog!!! i was wondering if you could tell my about how its like u know.