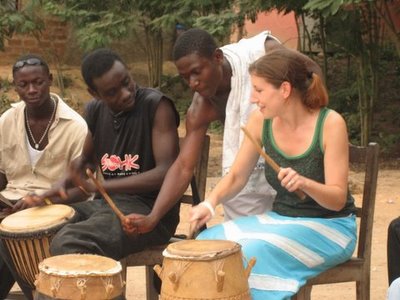 Right! Hello again! The Tour - yeah, that was well exciting and a bit scary and all of that. Don't worry though people, we're away from the sea and back to the village for the time being. I'm sure there will be more dramas ahead, but for now its back to the quiet life! (I've finally found the time to add Week 14 as well, so better late than never, if you scroll down you will find it there…)

Debbi and Matt packed up and headed to Jachie this week near Kumasi to sink their teeth into the project with Africachild and TACCO. (For more information go to www.Africachild.net) So we said goodbye for a while and let them go off for a more promising second half! They will be a lot closer to the Internet café's while there too, so we are hoping to hear more from them soon!!

This week was particularly special because on Friday we got our first aluminium roofing sheets on three of the classrooms! It has made such a difference already, and it is by far the most expensive part of the project but its also definitely the most important, as the dreaded rains are coming our way every minute!

The roof sheets have caused a drama of a different sort though, as the price of them has been increased twice in the last few months due to the fuel increases. The Petrol prices increased by only 500 Cedis (less then 4p) while we were on tour and yet the hardware stores have taken it upon themselves to put up the price of every roof sheet by 10,000 Cedis (about 70p). To roof the 6 classrooms was originally totaled at 13 million Cedis which was the largest part of our raised funds gone in a flash, but with the extra price on every sheet we now need to find 1 and a half million more.

For the most part of our first day back at work, we trawled around Cape Coast Hardware stores checking prices and unsuccessfully bartering with the owners to try and get the original price. It's so disheartening to know that the people of Ghana are affected so much by every fuel increase. The taxi drivers went on strike a while ago because of the same thing. They also needed to increase their fares (much more necessary being fuel users too) and as Taxis are everybody's main form of local transport it caused mayhem.

Now the price of petrol will never go down, as everyone knows, but the owners of big businesses like these are making unreasonable leaps that the average person cannot keep up with.

We also know a couple with a baby who we are friends with from the Culture group who are being evicted from their rented property in a month. We have helped out with some roofing sheets for the house they are building, (which is basically one room) as they have real financial struggles, but if the price keeps on jumping like this, they will never be able to finish their house and will end up homeless.

While we were on Tour, Caroline and I missed the children and spent time filling Charlotte in on all the personalities in the groups. The lively ones, the jokers, the brilliant and the bossy, this was Charlottes first week of meeting our horrible, wonderful kids. I am happy to say it was a good meeting and they have done us proud. They are all extra excited to have another Obruni teacher now as well.

Our first morning was a mini riot with both KG1 and KG2 together, and lots of singing and mucking around involved, Charlotte was instantly a favourite with so many of them as she definitely has a natural way with children!

Caroline has met a lovely lady from Theresa's family who makes Tie and Dye and Batik clothes on order. She is called Gloria and Caroline is going to be helping her out from time to time with the various methods and prints. Gloria works just outside her house, under the baking sun, as her building has not been finished yet. She has to mix the dye by hand and has no mask or anything to protect her from the fumes. Her work is beautiful though, and when the finished products are drying in a row at the top of the hill it creates such a beautiful sight of vibrant colours and patterns that you can see drying in the breeze.

Eventually it is in the plans of CEJOCEP to create a workshop where women in the village can go and print on their fabrics and cloth. They would then be able to sell the designs and create some money for themselves, maybe under one name. The workshop would also become a training centre for the benefit of the younger women who would be trained up in that skill.

The work at the centre this week was mainly weeding the grounds just near where we used to teach. The area is full of trees and some small plants and the job is done with rakes and larger versions of the gardening hoe. The area is so nicely shaded that even at midday it is cool to work in and with enough people working, you can get quite a large area done in a short space of time.

The only downfall of this job is the mosquito population in the area. They are black and white striped and come out in the daytime. Effective repellant and a pair of trousers is always the best way to avoid being bitten, but these critters were interested in any bare flesh found, so got us anyway. I have found the bites to be annoying, but as long as you don't scratch it when it is itchiest it goes down pretty quickly! Although dangerous, they are no way as annoying as the tiny ants that take a bite and won't let go. Ouch!

Our friend Amponsah invited us to his Sister's wedding this week in Abura. They are Muslim, so we covered up completely, donned the customary headscarves and got approval from the rest of the family before going. The weddings in Ghana last three whole days, and we were invited to the final part – the Sunday afternoon ceremony.

After preening, we walked to the place where it was all happening to find that we were arriving late. Not to worry in Ghana though, as there is no official time for anything, and even if there was, it would never be held to! There were tonnes of people there, all on the obligatory plastic chairs, and we took our places at the back of the courtyard. I was surprised to see Amponsah's mum sitting just one row ahead, rather than at the front of her Daughters wedding, but then as the whole thing seemed quite free, I realised no-one minds where you are or when you come as long as you make it.

The Bride, Groom, Best man and Maid of honour all sat on stage to one side of the 5 Imams. Amponsah's sister looked absolutely stunning, and not at all nervous considering the marriage had been arranged. The two families had known each other for a while though, and we were told they were happy to be getting hitched. The service was in Fante and Arabic, although Charlotte, Caroline and I could never have told you which was which! There were prayers, a short sermon, love songs and some rites performed that I don't know much about. Then Amponsah whisked us off at the end to appear in his family photos!!

(written by Lucie)
Posted by Lucie Jade at 5:49 pm