Something else (part two) 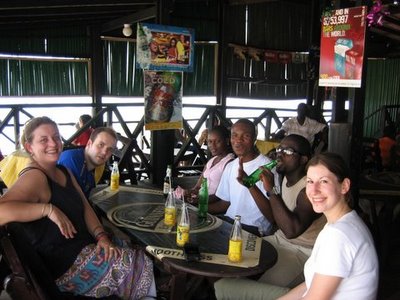 It may have been Charlottes first experience of a wedding here, but Caroline and I have been to many occasions now that are worth a mention…
The first weekend after our induction we were a little bit confused to be invited to a wedding of someone we had never met. Similarly, the confusion arose the very next weekend when we were invited to attend a funeral. We have also been to a Graduation like no other.

Unlike our weddings, there are no table plans here, invitations by post or Bridesmaids, but some things remain the same as our ceremonies. The all-important sound system features highly, and usually comes in the form of a rig you might find at a small rave! The huge speakers blast out High-life songs at a constantly distorted volume loud enough to hear in the next village. The DJ's like interrupting these songs with their own invaluable comments on the dancing taking place, or general observations about those who have chosen not to dance.

Drinks and snacks are provided usually in the form of a bottle of coke or sachet of water and a rock cake. At the end of most ceremonies, guests are presented with a polystyrene box containing their 'take-away' meal, usually rice, fish heads and hot sauce!

At the Funeral we went to, the Culture Group were performing some of the traditional dances, so we had front row seats with the Directors of CEJOCEP. All these occasions cost the families involved a lot of money, so it is customary to provide a small donation to them to help cover the costs. When our Culture Group were dancing, they also received donations for their performance and in the same style as sexy dancers, had the money tucked in their skirts or shorts by the crowd.

The Graduation was very entertaining and we felt even more special as this time, we knew the person who it was all for. Faustina was Graduating from Hairdressing school, as her master – our mate Esther had believed she had reached the right level of skills and she could go on to open her own Salon.

We arrived an hour late at 11am, but after two more hours of waiting for more people to arrive we realised it had not been a faux pas! We were made honourary chairpersons for the proceedings by Lawrence, who was MC-ing the event. Caroline and I were not expecting this at all and had hoped we could sneak out of our very prestigious positions and go and sit among the crowd, but no such luck. With speeches to give, we were brought up on stage and seated in important places in front of everyone!

The guests all need to bring lots of money (in low denominations) as the party lays on food to takeaway and drinks, all which cost a fortune here, and the way in which the host gets their money's worth is usually quite fun!

The ceremony included hiding Fausty at the start and making her family pay money for someone to go and find her and bring her. She was brought in covered in maybe 15 cloths and the guests had to dig in their purses and pay to reveal them all. (When each cloth was removed we were one step closer to seeing her and the new hairstyle she was sporting.)

The games hadn't finished as more money had to be paid to protect her beautiful hair style being spoilt by talcum powder! It was loads of fun, and when they had decided she was ready and could graduate it came to our turn for speeches. Luckily, the microphone was playing up by then and we kept cutting out, so Lawrence had to repeat everything we had said in Fante and made us sound really great as we got a lot of applause!

I am personally a big fan of animals, although, mostly just to look at and only if they are not too dangerous.

Before coming to Africa I was a bit nervous that there would be tarantulas in my room, and snakes in my boots, that sort of thing, but so far I have just been amazed at all the different wildlife I have seen, and none too close up. It has become a little joke between us volunteers in the case of insects, as every time we are walking somewhere and I spot another various pretty winged creature I stop dead in my tracks to get a closer look and get left behind, saying 'Wow!' Everyone says 'Another 'wildlife thing' is it Lucie?!'

The most impressive animal and insect groups that I have got used to seeing now are:

Dragonflies and Butterflies – absolutely beautiful, they appear in their dozens and brighten up any dull morning. [Ghana is home to more butterfly species than anywhere else.]

Fireflies - They can be found glittering in the bush like fairylights. Garenteed to guide us safely on the path home at night.

Birds – in particular, the tiniest little birds I have ever seen are especially cute when you walk past some tall grass, not even noticing them and all of a sudden 14 of them flutter past with a chirp and land on the nearest telegraph wire.

Frogs – Since the rain has increased, so has the frog population. They have been spawning in millions and I've even had dreams of them taking over!! Every dry night you can hear the chorus of hundreds of frogs just outside our window!

Goat / sheep hybrids - Is it a goat? is it a sheep? Most of them are distinguishable, but some of them look worryingly like a cross between the two!

Migrating ants - These have fascinated me at all hours of the day, on all sorts of paths, weaving their own walkway and carrying their luggage across a gap of maybe 2 metres in their hundreds.

Giant Spiders - I was reluctant to mention them as it may put people off coming, but the ones we have been sharing a house with are very harmless and we have overcome any problem with them by calling them Ananse to make them go away. (He is the African folklore hero who is both a spider and a man in many good stories.) We had a mother spider carrying her huge egg sack in our shower room and the idea of all her babies hatching was the only scary spider moment we've had really.

The most annoying ones (or ones I won't say 'wow' to) are:

Mosquito's – as you would expect, these pesky things can irritate even the people most cautious of them. And every bite has the possibility of the malaria parasite being transmitted, which both Caroline and Charlotte have had already. I have squashed plenty of them so far, and there is a sense of satisfaction if you get them just as they land, before their proboscis gets you!

Teeny flies - At altitude these things appear from nowhere in their dozens and lazily fly around your head and even into your eyes at times.

Teeny ants – I have nicknamed them the Critters. They are much smaller than normal ants and not entirely black, but slightly dark reddish. They hold residence at Jeffrey's house and appear in swarms on any surface they like at any time. It is very annoying to find them crawling through the bread we have for breakfast, or being woken up with a group of them playing around my ankle! Pesky critters!
(They are even crawling across this keyboard as I type!)

(written by Lucie)
Posted by Lucie Jade at 5:55 pm