Sorry for the wait... 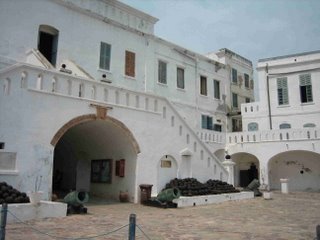 So… I never managed to finish writing about Charlotte's induction into our cosy part of Ghana last time… As the boys who managed ours (Charles and Joe) had gone back to Accra, and the induction is now only for one person, we decided to enjoy the fun ourselves. (All the challenging things like Fante and Culture lessons we would leave to the experts at CEJOCEP!)

Charlotte has now been to most of the tourist things we did all those months ago. We spent a morning at Elmina Castle and the afternoon in the town, and then lapped up the luxury of the pool at Coconut Grove once more! Charlotte also managed to brave the walkway at Kakum and spotted Crocs at Hans Cottage Botel.

As custom demands, when there is a new arrival to the village, the Chief must be informed. All the rest of us had our glorious meetings with the Chief and Elders of both Kakumdo and Bawdia during our induction, so it was only right that Charlotte's time had come… Armed with the usual bottle of Schnapps (a gift to pour libation to the ancestors) we dressed up as smart as we could and proceeded up the hill to the Chiefs Palace.

Kakumdo is 'between Chiefs' at the moment. Their old Chief popped it just beforf the wonderful work that had been going on at the centre. They were all pleased we had come to help in their village and should other (nothing like ours) will address all these qualities in the prospective Chief.
When they have selected the lucky person, they will make some arrangements for that person to come back to the village and send for him.

Then on the right day, the chosen Chief would be grabbed from his house and brought back to a closed room for 6 days of preparation. (In the closed room, he will be taught the entire history of the village and also any other information he might need while he serves as Chief. He will also use this time to decide on a new name for his Stool!)
On the 6th day they will 'Enstool him' as Chief of the village in a 2 day ceremony and party.

There are about 10 Elders in Kakumdo and one Queen Mother and they are all Elders of different clans. Each Clan has its own symbol and cloth, but once in the Chiefs Palace it is the Linguist who rules over all. He speaks on behalf of all the Elders and more importantly, keeps hold of the bottles of gin, schnapps and various other spirits, that have been presented as gifts!

Although I have been practicing Fante as a language for three months now, I am not fluent enough to understand what is being said much of the time, which is a little frustrating, but the ceremony went according to plan, and we all introduced ourselves and explained why we were there as expected.

The Linguist in turn welcomed us all and said he had heard of the wonderful work that had been going on at the centre. All the Elders were pleased we had come to help their village and we should begin to pour libation to the ancestors. This custom is a dangerous one (especially if you haven't eaten first.) The Elders and guests all get offered a generous sized shot of the spirits. You can drink it all or choose to pour it on the sacred ground of the Palace for the ancestors to drink.

Most of the Elders had huge shots poured, and the most potent drink was a local one, which was a type of gin that left your mouth glowing. Needless to say, once the ceremony was over we all piled out grinning and merry, Elders and guests alike!! I even bagged an Elder as a Husband as he quite charmingly said I had a small face, but plenty nose and he liked it! ;)

Unfortunately for Charlotte, she got ill the same night. If it was the strong alcohol or the usual Western adjustments to climate we will never know, but a dodgy tummy kind of fits into the induction course as something we all had been through – sorry to say it was like a final initiation. :(

Things for Charlotte did not go according to plan in the beginning. It was hard to place any blame as the circumstances are just unfortunate, but, Sally Honny, the amazing Pharmacist in Cape Coast, who supplies ATN volunteers with health lectures on arrival, was not there at Charlotte's arrival. We were told she has traveled to the UK! And this proved to be even more harsh because Charlotte is studying Medicine and was hoping for contacts in the hospitals around Cape Coast.

Although new to things, there was ATN business to be getting on with too, and Charlotte along with Charles, Joseph, Caroline and I all made our way to Saana Lodge. This Hotel has been hosting Gym equipment for Africatrust Networks and had started charging customers to use it, but never given any of the money promised to Africatrust's Partners. The Hotel said they had not had many customers in the last few months and was even changing owners in the near future, so to bring it up with them. The new owners would be able to shed some light on whether to keep the equipment there at a loss or find it a new home.

The week before Easter, with the children off school, I assumed we would be getting dirty and doing loads of work (digging - my favourite!) But instead it was suggested that we rest a bit before traveling North on our tour of Ghana. (Boring!) So the others rested and I opted for the only work available…

Monday and Friday, I got the chance to be a brickie! (Or at least a Mason's helper.) I loved it so much I may have found my new vocation! There is so much to be said for standing on the roof of a structure and using a trowel and mortar board! I used a spirit level too and the Mason didn't have to correct my work too much. Dead chuffed about that!

We also spent one afternoon playing LUDO up at the centre. The game is played so fast here, and for every volunteer playing there was a Ghanaian helper shadowing, moving our pieces for us and yelling to speed the game up. Cheering, encouragement and jeers to the other players about their pieces having to go back to base made the game hilarious! I never thought LUDO could be so much fun!

Tuesday, Caroline and I went to help Ben from the Culture Group paint his new shop. He has been working on it for the few months we have been here and now it has finally been erected and is in need of a fresh lick of Paint. Boga and Amponsah were also there to lend a hand. We painted the majority of it white and the lowest few layers of wood in dark green. Ben named it 'Clubino Collection' which we don't understand, but he likes the sound of it, so that's good enough for us!

It was such a fantastic day, as we are good friends with all of them and to be able to help in this small way just by giving up some time was really nice. We had a real giggle painting too! The shop sells very new designer men's clothes to the young men of Abura. T-shirts with 50cent on the front, some Tommy Hilfiger and Von Dutch, that sort of thing.

Debbi and Matt have been experiencing things very differently in Bawdia and have come across some major problems. They are going to be leaving Bawdia and the project there in the hands of the retired headmaster Mr Okoe as they feel that it is not appropriate to be spending time and money on a Government School after they found out the plans to refurbish the School had already been made.

The School will be using money from the Government to work on the old Primary building and not to invest in a new structure as Debbi and Matt had been led to believe.

The whole team are upset about what has happened there, most of all Matt and Debbi as they have grown to love the School children and members of the community, as well as begin valuable computer lessons with the teachers and also extra reading lessons for the under achievers. All their hard work will not go to waste, but we all feel deeply saddened that this has had to happen. However, Africatrust wishes Bawdia to remain an outreach placement for future volunteers and has not lost all hope in the future working relationship there.


Good news for us though because Matt and Debbi arrived to stay with us in Cape Coast on Thursday, so the house was now very full but very happy. We caught up on all the news and heard about the situation in full. It seems the experiences can differ greatly due to a few factors, but it made us feel much more lucky to be working with CEJOCEP. In Bawdia there was no NGO to work for, with a common goal for improvement.

We went to Mobil spot on Friday night for a bit of fun at Ladies night, and Caroline, Debbi and I enjoyed a good dance to the Hi-life and rap music. Then Sunday morning, Charlotte and I went to Abura to The Roman Catholic Church and met Ben and Joseph there. It was The Easter service, and as usual it was in Fante so we didn't understand much of the content, but there was lots of singing and very beautiful clothes to look at.

The Tour starts on Tuesday and I am going to let someone else write that one up as I have done so much writing now… It will be nice to have things from someone else's perspective.

(written by Lucie)
Posted by Lucie Jade at 2:48 pm