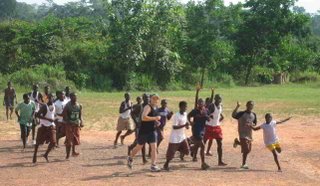 The children broke up from School this week and Caroline got all the fun! They had a party on the last day with fizzy pop and party games! They were all allowed to bring in a toy and also wear their own clothes, a sight I wish I had a chance to see! :)
Caroline has told me it was an incredibly noisy but happy morning and that she had not much more to do than supervise them playing and sing songs with them. Bliss!

(My last morning of term with the tresures, I sang my heart out to teach them a new song. The subject was inspired by none of them knowing their colours right in the exams last week.
The song was made up on the spot, and involved some dodgy rhyming and a stolen tune.
'Yellow is the colour of the Sun' .. 'Green is the colour of leaves' ..
'Blue is the colour of the deepest sea' .. 'And red is the colour of berries!'
I even drew a picture using coloured chalk! Nope, no good. It doesn't rhyme. nor was the tune any good. Nor could they sing it. Must have been a hippy moment. Back to the drawing board with me!! )

Its not rainy season here for another month yet, but when it comes I can assure you I will be losing my tan quickly and probably catching the cold I so very narrowly escaped before coming in January!

Last Sunday we spent the whole day in the house because of the rain... it would have been boring, but lucky for us, some of the guys from the Culture Group had come to visit. We must have watched 6 films in a row!! We had bought The Matrix on VCD for Jeffrey as a present, so we watched that one first, then some third rate 80's films that had been recorded from the back of a cinema! Next was amazing ones with Jet Li, and all the while the rain was getting heavier, the thunder and the lightening more intense. (All added to dramatic effect for the Jet Li ones though - Ace!)

Charlotte, our new recruit to the Cape Coast team was arriving this week, and Caroline and I had our last night just the two of us on Monday, wondering what Charlotte would be like, and what she would make of us, and the project. Now we have been here for three months we both feel so at ease with some things. Remembering back to the first few weeks we were here, there is so much to take in and adjust to, we could tell how nervous Charlotte would be feeling.

I left on Tuesday by STC coach to Accra, which is the Capital of Ghana, similar to London in many ways. On the journey it seemed to me that so much of Ghana is currently Under Construction. Moulded blocks lying everywhere in neat stacks. New buildings sprouting up all over the place, half finished ones and some left altogether in a state of abandon.
Many of them are indistinguishable, guesthouse, house or spot, so alike in their curvy architechture and different brightly coloured walls.
The closer we got the more the buildings took on the characteristics of places for business, not residence. Then more Adverts started springing up.

The advertisments in the small towns here are mostly painted on the walls of the houses on the roadside. Key Soap or Nestle or Cadbury's, for all the passers by to look at and start thinking of. In Accra, the modernity sets in and the painted ads are replaced by only huge billboards and posters with the latest mobiles or perfume or watches...

In comparison to Cape Coast, Accra is free of rubbish at least. I have been used to a town where my usual incessant recycling is lost because no rubbish gets collected. The floor is the nearerst bin. It is a criticism of the Government that I observed and found out about when I first got here, because people somewhere get paid for the removal of the rubbish, and yet it remains, builds up, scatters everywhere into the landscape, spoiling that lush view. Then it occasionally gets raked into a pile and burned, which unsurprisingly stinks. Our local rubbish tip is right next to a whole group of houses and where the local children play football.

Also I have found that Boycotting Brands is impossible - the biggest 'no-no' brands like Nestle and Nike are everywhere, and nobody would understand why they are seen as 'bad'. My ramblings in the UK about multi-national corporations are only brought to life even more when I see the hold they have over developing countries.

Almost all coffee is imported from America, and the menu will even state 'Nescafe' instead of 'Coffee'. This seems stupid considering that Ghana grows its own coffee beans. The most widely available soft drink for children is 'Coca Cola' or one of it's other formats such as Sprite or Fanta . Yuck. There are also three different types of evapourated milk (all with different names but all made by Nestle). Double yuck.

So leaving them all behind I have been scoffing the traditional Ghanaian dishes much more and I am mildly annoyed for growing a bit of a tummy since being here! Being a Vegetarian I thought I would lose weight but it all tastes so nice, I keep having seconds!

Accra smells. It has the same horrible smell of any city its size. And the same amount of traffic jams! The air literally stops when you are in a traffic jam here.
Luckily I had Charles picking me up at the STC station to take me across the city.

Once we had Charlotte safely bundled inside a Taxi I got to find out how things were for her. After an interesting flight sat next to a drunk lady, she was beginning to see her first glimpses of Ghana, albeit at night so slightly strange for a first view. The heat had gotten to her instantly, so when we arrived at the Golden Spoon in Tesanao she was pleased to find the bed and the fan to cool her down!

Next day we went to the Kwame Nkrumah Memorial Park. It was the second time for me and made a lot more sense than the first time!! I think it helps to have had lots of converstaions about him too, as he is such an influential figure in the history of Ghana, and yet was so controversial in some of his ideals.

On to Cape Coast and time for millions of Introductions. I am sure Charlotte faced the same thing we did when first arriving - not knowing who anyone is , if you have met them already, or if you will ever meet them again!! Saying that she has been doing a stirling job of trying to remember names and faces.

My time is up in the cafe now so more next time...

(written by Lucie)
Posted by Lucie Jade at 5:47 pm