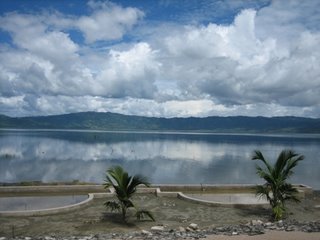 There are so many things I want to talk about that I haven't had the chance to mention...

This blog is constantly keeping me awake at night, where I write witty little one-liners (and then forget them by morning) but turns into a race aginst the clock when I am in front of a screen...

We have not experienced anything like the rain the Debbi and Matt have been caught in yet. But when it has rained here it has left its mark on everything. AND THERE IS PLENTY MORE TO COME!!! We have experienced a drizzle and a downpour so far. Both have interupted morning classes, and because we have been teaching outdoors we have been caught in it. The Children all sing 'Rain rain go away, come again another day' while all the adults clap their hands with happiness at the crops getting watered, the well filling up, and the temporary relief from heat with the coolness of the air.

I actually got goosebumps for the first time since being here - it was lovely! The animals didn't seem too impressed by it though (wet cockerels look so funny!) and the mud afterwards was remeniscent of Glastonbury Festival, which made me think I should have packed my wellies!

Rainy season will be interesting at the house where we are staying as we have been told the roof leaks, and the entrance becomes flooded! It starts in late April, and ends in September so we are oly here for a bit of it, and no doubt I will write more about it when the time comes. Nevertheless, the sight of a humungous thick black cloud darkening the whole sky, and everything becoming drenched within seconds with thick heavy rain drops, has been an eye opening one, no matter how much rain I have seen at home.

The main transport systems here in Ghana are Tro-tro's (like minibuses) for medium distances and Taxi's for a short hop. There are more taxi's than any other vehicle and they provide a constant flow of customers with 'a lift down the road'.

I like getting taxi's since I know what to expect now, but at first we were sheltered from all this by our main man - Henry - the smiliest Taxi driver in the world.

Reasons to be a taxi driver in Ghana:

1. No apparent speed limit (although they are never in much of a hurry)

2. No need for seatbelts, or indeed any safety features other than a mini fire exstinguisher strapped to the window nearest the passenger (which luckily we have never seen being used yet.)

3. If you are a cheeky type, you can try upping your fare to any tourist that gets in. Just make up your own number and swear blind that it is normal! And then try proposing to them as well...

Driver - "Hellooo"
Me - "hello.."
Driver - "Where you from?" (not "where are you going" like most drivers would ask!)
Me - "England"
Driver - "Oh, fine fine, so I'll be marrying you then, and we can go back there together, isn't it."
Me - "That's a bit quick for me driver, I like to know someone's name first at least!"
(Turned out to be Gabriel, and then he charged me normal price, which was nice!)

4. You can take on board as many bodies as you can fit in.
(Except when there is a Police barrier further up the road)

The most I have counted so far is 9 people other than the taxi driver (4 of them were children but it was still a squash!) Great fun when you are with people you know, (me and Debbi on the front seat - lovely times!) not so much fun when its people you don't know and they smell!!! But who can blame anyone for sweating in this heat?!

6. Decoration is the key to success. Every taxi is individually decorated with sticky letters on the back windsreen, CD's and rosaries hanging from the rear view mirror and furry seat covers. Makes your favourite driver more noticable amongst the others and even starts competitions for who can write the silliest slogans.

In the old days, there were many Gods for the tribes to worship and worry about, but traditional values like these are being over-shadowed by Christianity and Islam - Ghana's main two faiths. The European missionaries came in from the coast and set up schools as well as huge lavish buildings, so the coast is mainly Christian and Islam travelled in from the north of Africa.

So far we have been invited to mostly Churches, but we did get the chance to go to the Mosque in Abura as well! There is also a Synagogue in Accra that all four of us are going to pay a visit to when we get a chance. As Caroline puts it "we're on a whistlestop tour of Religion!"

One thing I don't understand is why Christians have so many denominations, as they have been given more importance here than I have ever found before. Everybody is keen to know your religious background and especially the denomination...? The services we have visited for those that want to know are Pentecostal, Anglican, Roman Catholic, Methodist and Jehovah's Witness so far!

My favourite observation while living in Ghana is that you get used to African time (which doesn't involve any watches) and the Church is no different. The service will start with a half empty congregation and be full to overflowing after about an hour, which always makes the singing incredible because of the sheer amount of people. Most Churches have had their own choir, or a band at least, and although some sing old school hymns, most of them have beautiful Fante worship songs.

None of which Caroline and I know though!

In fact, every service has been in Fante. Which means we don't understand a word of it. So we get to spend a few hours daydreaming and thinking about all sorts of things as well as admiring the beautiful cloth that the ladies dress up in.

It is lovely to see that the Christian and Muslim faiths can co-exist here so peacefully. The train of thought seems to be that if you love and serve God then that is the best way regardless of which faith helps you get there...

The best service we have been to was the one we stumbled across at night.
Picture this if you can...

Caroline and I had just gone for a quick drink and chill out at a spot in Kakumdo.
We were walking along the main path and heard the most faint sound of drums and something else. Getting closer we also heard singing. It was happening just behind a row of wooden stores.

We decided to go and investigate more.

There was about 40 men and women and there was a lot of Red cloth. There were candles in the ground as the only source of light and everyone formed a circle around them. The inner three people were jumping about excitedly. All this at the same time as the drums were making a constant crescendo with the bead shakers. The beads are draped over the gould on a kind of netting thing. Then the netting is yanked and shaken to make the beads rattle against the gould. (Does this make sense?) Anyway it provided the most beautiful and difficult to master instrument I have ever tried. You see, we came into sight (just passing don't you know) and got thrown right into the throng of it to join in.

The ladies began a song, it would rise and fall and the beat would get faster and faster, then some wailing (all in time perfectly.) They were offering up prayers, but we could not understand what about. Caroline and I having finished our trial of the bead shakers then stood on the side to watch and were encouraged to clap along until our hands wanted to fall off.

I could not stop smiling and feeling lucky to be watching it all. Still clueless but curious as to what we were watching happen, and who these people were. We found out they are from the Twelve Apostles, and then got invited to their service the following morning, a Friday. It seems they like odd times to meet, but as we were teaching we could not accept. If we hear the drums at night though, it makes us want to go and explore again... : )

(written by Lucie)
Posted by Lucie Jade at 4:37 pm