Hopping and other things... 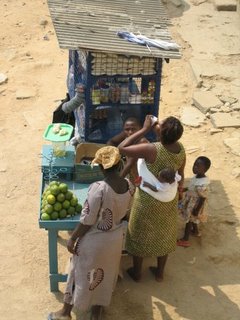 This week has been one for lovers with Valentine's Day on Tuesday, (Happy Valentine's to you all!) a tradition which Ghana seems to embrace as if they began it!

The easiest way to explain it is that the popular music in Ghana is called High-Life, and about 90% of the songs are in fact Love Songs!! They are also big fans of Westlife, Celine Dion, Elton John and Dolly Parton ??!! I have had some of the High-Life songs translated for me and the favourite so far is a guy saying to a sexy lady to 'Shut your legs love, I'm married!' Hahaha!!!

The tradition is to wear red, and to give some flowers or a soppy card to your loved one. Some people choose to go a bit overboard and wear red from top to toe, and tell every woman they see that "you are my sweetie treasure, light of my life, I love you, I miss you" etc etc (yuck!)

Caroline and I are not the type to enjoy the croonings and slobberings of this romantic day, but we got invited by several of the CEJOCEP Culture Group boys to the local bar (or 'spot') to watch the festivities unfold. Plenty of dancing, couples having fun in dark corners and one resemblence of a fight later, we realised it was past midnight and headed for home.

(The 'nearly' fight was quite funny, as Ghana is such a peace loving place, the DJ stopped the music before it happened to announce that if any blows were struck the night would be over. This prompted everyone else to seperate the two quarellers and sheild any lady in sight!! That was the very short end of the matter.)

The Culture Group have been very good to us since we got here, made up of about 10 guys and 3 girls, they meet up on Mondays, Wednesdays and Fridays to practice their drumming, cultural dances and freestyle. In particular we have been be-friended by about 5 of the boys, who now insist on accompanying us anytime we go to the next town (Abura) or to events in Cape Coast.

The rest of the group have been helping me to learn dances and both of us have been practicing drumming. Its usually better to watch them rehearse though, as we both feel a bit self-conscious when we are involved - but that's down to years of social conditioning I have been told!!!

The traditional songs are beautiful, and we have mastered a few, we are just hoping that they are not going to ask us to spring a rendition at some awkward moment in front of a crowd!

Our favourite drinking 'spot' so far has to be Tina Tavern in Abura. It has been the location for Valentines evening, and also became our home on Friday night, which was (and always is) Ladies night in the region. We did try to go to Cape Coast Hotel for Ladies night with Esther, but the bouncer wouldn't let her in because of her shoes... (Are bouncers the same all over the world?!)

We are trying to encorporate some more fun into our lessons with the children at the moment. It's definitely a hard job, and even the fun things are met with either blank faces or bored looks! The one thing they do love though is Incy Wincy spider. Its a sure fire hit to get them off their wobbly bench and making shapes with their tiny hands.

We now lack any form of tables as they were broken last week, so any written work is done on their laps or on the floor with a stick in the dust. It's a crazy situation, but until the school has a roof there is no way they can start using the money to buy anything else.

If the school is finished in time it will open in September, so during the Rainy season (May - September) the members of CEJOCEP will be harvesting the Casava plants they have been growing. This is then processed into 'Gari' which is one of the favourite foods to add to meals in Ghana. Its nice with evapourated milk and sugar added (kind of tastes like sweet bits of cereal) and also nice as a savoury dish with stew and sauce.

The Casava that is harvested, and the Gari that is made will be sold to make a profit for the organisation. This is how they have funded some of the former projects, and could be the way forward for some proper tables and chairs.

(written by Lucie)
Posted by Lucie Jade at 5:25 pm