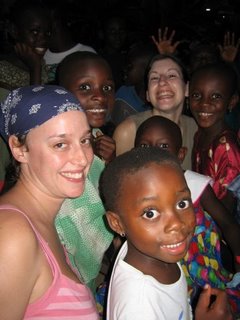 This week, we have been sweating our little bottoms off digging more of the 15ft hole that will house the safety tank. Its flippin' hard work, but well worth it as we both feel stronger already - Team Areeba! My favourite 'weapons' are digging with the pickaxe and spade, and Caroline's choice is to transport the earth on her head.

The hours we are working are the hottest of the day, so its no wonder we end up looking filthy and pouring with sweat (not a pretty sight) and we are always joined by the lads from Abura to put us to shame with their strength and speed. (Just when we don't want anyone to see us looking so nasty!) Anyway. the toilet block is coming up a treat and we are bending rods again next week to make more towers to support the ceiling/floor.

The children have been lovely this week as well (don't understand why!) for example Priscilla has been stroking Caroline's arms a lot while giving a cute sideways look of 'Oh madam!' We had more rain as well on Thursday and Friday so we are now used to the manouvres involved. We have to peg it out in amongst the trees to bring our blackboard and benches into the nursery area.

Entertainment then comes in the form of me - acting like a 5 year old by tongue rolling, making animal noises and good old sing songs. I am getting used to the constant chatter in another language now, as the children don't seem to care that we don't understand a word they are saying and just spout all sorts of stories at us. The facial expressions are what counts and my favourite little 4 year old Francis Acqua is the best at those.

I am guessing that his converstaions go a little like this:

"And then Madam, I would run over and bop him on the head and karate kick him in the stomach, and there would be an explosion BOOM! and then I would make my escape in a helicopter..."

They are all gearing up towards exams before Easter. It will be their first ones ever and the whole thing is new to us too. We've been asked to write the exams! (How do you test 4 year olds on the alphabet?!?) We are nervous about how they will perform but have a few weeks to revise with them what then need to know so hopefully we can swing it so that they all pass and make us look like excellent teachers!!!

On Friday Debbi and Matt joined us so that we could get ready for our Evaluation meeting with Charles and Joseph from Africatrust Networks. We were all a bit unsure as to what was going to be brought up in the meeting, and wether it was an evaluation for us, or of us. But everything went well as we had to fill in a questionnaire neatly typed up by Joe and then add any other comments in a group discussion afterwards.

We have so much praise for CEJOCEP as our experiences have been almost entirely positive so far, but for Debbi and Matt things have not been going well at all and they have felt let down by the situations in Bawdia. This has made things hard for them, and when we meet we can tell the stresses they have been under (and most of it caused by the Government of Ghana) but we know that after spending a weekend with us by the sea it is a little R&R for them both.

Saturday was Esther's Birthday - a night we have been looking forward to for ages! Originally the idea was to have a cocktail party for about 25 people under the trees where we usually teach, and a sound system would surely make an appearence, but this all got changed last minute to Tina Tavern with dinner being taken with us. (There are no problems with bringing your own food into spots here provided that you buy at least one drink from the bar!) Esther's cooking is always so good that it puts the food anywhere else to shame!

The night was great fun!

They gave us plenty of plastic tables and chairs, and we sat out to the side of the spot in front of a closed shop, so we had loads of room to ourselves! The beer flowed, the music thumped and we all spent a couple of hours laughing with each other and repeatedly singing Happy Birthday to Esther. Here they like to embarrass at every opportunity (with no real harm done) by adding a chant of 'How old are you now, how old are you now' in the same tune as 'Happy Birthday'!
Posted by Lucie Jade at 9:39 pm