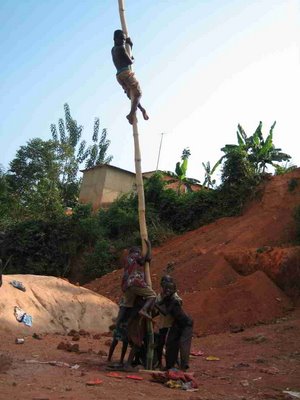 Caroline and I are now working with the wonderful NGO called Centre for Job Creation and Environmental Protection CEJOCEP in Kakumudo, Cape Coast. Run by the most enigmatic and humbling people - Lawrence, Sylvester and Theresa, for the benefit of the community in Kakumudo and eventually other villages in the area.

We are not the first volunteers who have worked with them, as they have hosted Operation Crossroads Africa OCA from America for the past two years, but I am hoping that we bring a bit of British flavour to the project as we are staying for six months and the previous helpers were here for only a few.

CEJOCEP's vision is very large and we will only be here for a minute part of it. Namely the first school building. It will cater for the children from age 4 to about 8 and after we have gone the next part of the plan will be a four story building to cater for the older children. (After that there are clinics, farms and all sorts of other wonderful ideas on the CEJOCEP list!)

To give you an idea of what we are experiencing, here's a rough guide to our daily timetable:

5.30am - Wake up to hear cockerels squawking just outside the window (sounds as though they are right beside my head though!!) doze back off for a bit

6.30am - Jeffrey, now our only housemate for two months, hums past and turns on the radio in the hall to a station that seems to play as much fuzz as is does songs.

6.45/7am - Get up to wash in the shower room but in the mornings there is never running water so it is always cold water from a bucket! Sure helps with waking-up though!

7.30am - Breakfast is cooked by the lovely Esther - our favourite person in Ghana so far! Variations on Pancakes / Porridge / sweetbread / omlette sanrnies(?) / something called Pap (tastes like it sounds!) and a good old cup of Tea!

8am - Start work at the centre teaching a group of 4 and 5 year olds. We are teaching them under a group of trees until their classrooms are finished.

We are teaching them the alphabet and basic number skills. (In the two weeks Caroline and I have been teaching so far, we have found out that we are by no means natural teachers and we are now actually getting lessons in how to keep their attention for longer than 5 seconds!)
We are lucky to get to the letter 'd' before they all start running off for a wee or a herd of goats take over the classroom!! Great fun even though it is thoroughly knackering!!

12pm - Lunch!!! YUM! Red red and plantain / egg stew and rice / mashed yam and palava sauce to name but a few of the meals!!

Yes, we have been allowed to use pickaxes and everything! Its a get your hands dirty kinda job, and we are building muscles where we never knew they existed.

We are brick moulding(breeze block size) to finish the 6th classroom.
We will also be involved in the roofing / plastering / painting of the building during the time we are here.

Any of you who have helped with fundraising - this is where your money is going! It's so exciting to watch the building grow!!

5pm - Work over time for some culture!
We have a range of afternoon activites from drumming (the bongo and congo kind) to cultural dance, or my favourite - freestyle dance (imagine lots of 80's style robot movements, and a few moon walks etc, but far far better).

Last weekend Caroline suffered a bout of Malaria, which put us out of action for both days, and by Thursday I had developed a foot infection from a mosquito bite that turned nasty. So we are hoping we have had our illnesses for the whole trip now. And we are both excellent nurses now too!

To date we have had our fair share of marraige proposals too! In the market this morning as I was looking at some tops I was asked to marry a guy called Ben before he had even asked my name!! It is light hearted enough though, as if I had taken them all seriously I could have a male hareem by now!! (Ooh the thought of it does appeal!)

We spent this afternoon with Sylvester and Esther on Oasis beach and the waves there are so strong it would be crazy to try and even swim there, but paddling to the waist is fine and sandcastles are always good. Esther's son and Sylvester's two oldest children came with us and this was their first time in the sea!! They were so cute! Completely bewildered by every wave that came along, and in awe of all the local children playing around so unafraid.

(written by Lucie)
Posted by Lucie Jade at 6:05 pm

Hello to all four of you currently in Ghana. It's great to hear of your experiences as it reminds me so much of my time out there (six months in 2001) where i was in a group of six based at Dunkwa-on-Offin.

Sounds like you're all having a great time. Good luck with your teaching (i know how hard it can be) and the projects you are working on. During your easter break, try and get up to Mole Nature REserve in the North - it is fantastic - and unless you're really keen on the idea, you could do with missing the ferry along the Volta. It was an interesting journey, lasting three days, but not one i would repeat!

I will be carrying out the Manchester Uni careers fair on the 8th March on behalf of Africa Trust - do any of you have any comments or feedback i can offer the students?

P.S. One other thing, a comment on the blogspot, could you add the dates on which you write so we can see the chronology of when you added your comments.