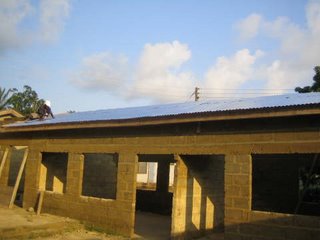 The days have become even slower this week.

We are able to keep up the teaching, Charlottes hospital visits and work all at a relaxed pace, and still find the time to watch films, play card games and have a natter with the boys from the Culture Group.

More rain has been the main reason for this relaxed pace, but also because we are still sourcing the best and cheapest roofing sheets, and until then we really don't have much to do except the basics.

We ran out of water this week, and by that I mean our usual supply stopped completely, Jeffery's reserve was used up, and the other villagers were in the same boat. Jeffrey found a pump that was working in the next village, so we all set off one night to find it.

There are huge differences in the queueing system here, and we were very privallaged to be put at the front of the semi-queue when we got there. A small fee was paid, and we set off with our full buckets. It may seem strange, but to carry things on your head is much more comfortable and practical when you are walking over such rocky terrain, that to carry the bucket by the handle seemed ridiculous. It must have been funny for the people passing us, that these three white girls were copying the traditions and fetching their water.

When Caroline and I arrived, we had our funds in our personal bank accounts, and accessed them from several trips to the bank. That meant that every time CEJOCEP needed to buy bags of cement or a trip of stones, we could pay for it when it was needed. Now CEJOCEP need some more funds to get things going, but Charlotte's money is a bit tied up.

Charlotte's fundraising money has been put aside into the Africa Bridge Club charity, which is based in Wales, and to access that money has now become quite a task here. To get in touch with the UK is not as easy as it seems and lots of visits to the internet cafe's as well as expensive phonecalls to England have made things tough. We are hoping that it won't be too long before she can get it.

I've been a bit over-keen to do some physical work ever since the hole we dug for the safety tank filled up with rain water. It has put a stop to the pick-axe fun, but Lawrence has been finding me all sorts of odd jobs to keep me out of trouble.

The area around the centre has grown many weeds and so I have been enjoying my brief encounter with gardening, and digging up old roots this week.

Sly and Lawrence have been involved in finding Charlotte a placement at a local hospital for her to volunteer at. They have worked all hours enquiring and travelling with her to find a suitable position.

It is so encouraging to know that they have taken us under their wing with such care, even though Charlotte won't be able to spend as much time at the CEJOCEP centre, they know it is her passion and are bending over backwards to try and achieve it for her. They truly rock!

A few of the boys from the Culture Group have taken on the role of assisting us with teaching, which is helping to bridge the language barrier a great deal.
We can now have things explained to the children in their mother tongue, and also their comments and questions can be answered straight away.

It has never been a problem communicating with the children, as they are so lively, and a few of the older ones know enough English to get by. Language is not the only communicator though, and Caroline, Charlotte and I all have sussed out the personalities of each child since we started.

My class have been improving their understanding of letters and their sounds in the last few weeks, and now we are working on two or three letter words. It is very satisfying when they remember something other than a song, and I am starting to feel real progress is being made!

It is so tough trying to explain things like the sound of 'sh' 'ch' 'th' and other diagraphs, but I have drawn all over the walls in chalk in an attempt to help them learn.

It was Ben's 19th birthday on Friday night and we all went to a bar in Abura called Em J spot. It was lovely to take Ben out and buy a few drinks for the others, as we know they would not have even celebrated otherwise. I think this is the first time Ben had gone out for his birthday before. (So different to what we are used to, of birthday parties from age one up!)

After singing 'Happy Birthday' with the extra round of 'How old are you now?' it was time for speeches. Everyone around the table takes turn to stand up and wish the Birthday boy a good time, a long life and any special messages they have. Then, out of nowhere, a whole sachet of water got poured over him, and everyone cheered. It is nice, I have been told, that he had water poured on him, as on your birthday here it could be any drink at all that soaks the celebrator.

It has really become a new home to be living here though!

One of the kids who helps us in the afternoons - Alex found a tortoise the other day! I have a feeling it might end up as soup for someone, but it was a cool find and everyone in the aea got all excited to see it!

The frogs have been making babies in every puddle since the rains started too. We have a small flooded area around our house and they spend all night croaking in it. They even make their own songs - something to rival Paul McCartney's Frog Song any day!

We got to understand the inner workings of the family life here too. We went to Bogga's house this weekend and spent the afternoon with his family learning how to Palm Fufu and make Groundnut Soup. It takes hours of preparation, but tastes so delicious!

The pecking order of siblings (age order,) and also the gender roles play a big part in what work you are required to fulfil to be able to eat together at the end of it. I got the job of peeling of the cassava and plantain and also wafting the fire in the stove (best not to let me cook really).

His mum is so lively and had lots of questions for us girls, we were very privalaged to be invited to such a lovely household.